Netz-trends.de wanted to know more and asked a manager of a big German price comparison website in Hamburg. We are publishing the results of our conversation in anonymised form since nobody in the internet industry wants to publicly take on Goliath Google Inc.

How believable are the charts that Google Inc. is currently sending to media and political representatives regarding their product Google Shopping in order to react against the European Union's antitrust lawsuit?

Question netz-trends.de: How believable are the charts that Google is currently sending to media and political representatives worldwide regarding their product Google Shopping in order to react against the antitrust lawsuit of the European Union against Google?

Answer: Google only depicts half the truth in these charts. Reason: It's not just the traffic on Google Shopping that's a deciding factor which Google depicts in these charts. It's much more important how many users click on Google's advertisement that Google displays in the user's search results which then create revenue on Google Shopping. It's not about the traffic, it's about the money.

Question: Why do you think that the charts sent by Google to media and political representatives don't convey much about the meaning of Google Shopping as a machine to create revenue for Google Inc.?

Answer: The charts are not transparent. I think they are traffic charts created by one of Google's own services - possibly by Google Trends. These services have possibly been restricted to only show the traffic for Google Shopping. However, the shopping ads that Google displays are not really about the clicks directly leading to Google Shopping but to shops owned by others. If users click, Google receives money, about 20 Cents per click. 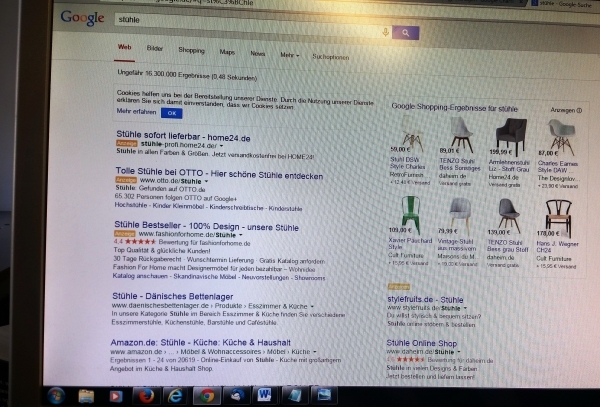 Google Shopping: Google does not display the clicks on third-party shop providers shown on the right hand side (also called PLA, Product Listing AD) in the comparison charts that Google has sent to media and political representatives. However, these clicks should be responsible for 95% of Google Shopping's revenue since Google receives 20 Cents according to estimates - possibly a billion Euro business considering the 500 million EU citizens, a lot of them searching for products on Google on a daily basis. The advertisements in the upper left corner are Google AdWords ads. They allow the usual price comparison websites to display advertisement on Google for a fee. They are currently becoming more expensive and don't generate as much traffic as they used to, since more consumers click on graphically highlighted ads such as those by Google Shopping. Amazon and eBay are also allowed to advertise in such a manner, however, not the usual big price comparison websites.

Considering that Google Shopping only generates maybe five percent of the clicks to the third party shops promoted in Google Shopping, this also means conversely that 95% of the revenue-relevant clicks for Google Shopping are missing in the charts published by Google.

Question: What exactly does Google Shopping mean for Germany's price comparison websites and for those in other European countries?

Google Shopping is majorly significant considering that Google offers a directly competing product and doesn't allow other price comparison to have access to this kind of advertisement placement, or even offer similarly prominent and revenue-generating advertisement placement. The only form of advertisement we are only allowed to display are text links - speak Google AdWords - and Google highlights their own Google Shopping advertisements graphically and prominently - this is practically outside of any competition that all other competitors have to submit themselves to.

Can you as the provider of a price comparison website with more than a million users a month already feel the impact?

For us, this is a vicious circle since we have to pay higher advertisement prices for Google AdWords advertisements and we receive less and less traffic. Most price comparison websites already receive 80% of their traffic and thus their revenue via advertisement on Google - either through Google AdWords text adverts, for which they have to pay, or through traffic generated by natural hits, which is also on the decline since Google pushes their own competing products.

The charts that Google have made available to the media regarding the supposed traffic on price comparison websites, so the amount of users on these websites, are really an audacity and untrustworthy and don't document at all the existing amount of considerable damage that Google does to the competition. This is really just about pushing the competition out of the market, a war, that the US website Google wants to win no matter what, and is already winning.

Additionally, both the US websites Amazon and eBay are really out of place in these charts, considering that Amazon is primarily an online market place, a department store, and that eBay has become one, too. These two websites can also buy into the PLA via auctions and participate there - traditional German price comparison websites such as idealo, günstiger.de, billiger.de or preisvergleich.de cannot.

How large do you think is the revenue-relevant traffic generated by Google Shopping?

Considering that Google Shopping can hold their own against the biggest German price comparison websites even in Google's own charts, which, according to our estimates only consider a maximum of five percent of the clickouts with which Google Shopping actually generates revenue, you can guess how misleading Google's charts really are. 95% of the revenue-generating clicks to third-party shops are not even displayed! In addition to that, Google Shopping is really only a drop in the bucket.

Google does a similar thing in their business with the commercial representation of addresses of freelancers, but also in the sale of hotel rooms, flight tickets, insurances and many other things. Google has turned to creating their own sales platforms for everything and anything, mostly unnoticed by the general public, which degrade any competitors to highwaymen. Only those get to move on who pay a passage fee to Google Inc.

We love Google because the search engine simply runs fantastically well but we make a very clear request: The search engine and Google's other business models have to be clearly separated. Google cannot and must not handle everything themselves. This kills the soul of free internet and free economy.

These are Google's charts causing the outcry:

The charts that Google has sent to media and political representatives are untrustworthy, says the provider of a major German price comparison website.

If you would like to read Google's statement, please copy that link: http://recode.net/2015/04/14/here-is-googles-internal-response-to-the-imminent-e-u-charges-memo/