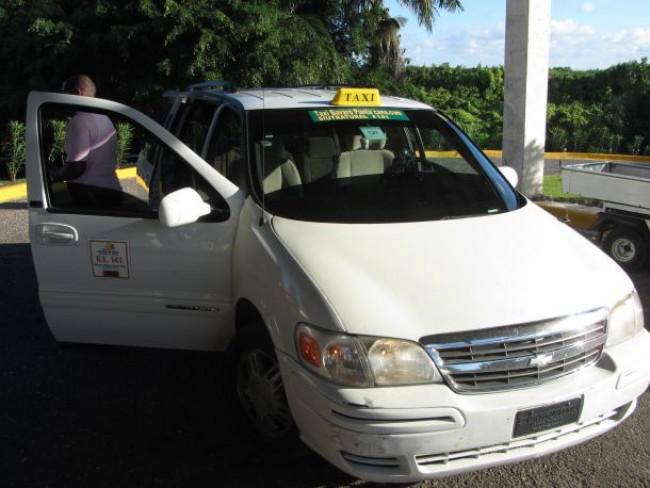 If you need a taxi in the Dominican Republic, you are dealing with an organised mafia-like system ripping off tourists with only one goal: to take as much money from tourists as possible.

Most, if not all taxis in the Dominican Republican still don’t have a taximeter in 2013. In a country that’s frequented a lot by tourists, that’s a rather unique feature in the world. Even in China or Malaysia, as well as South Africa or Abu Dhabi, taxis use official taximeters. These meters only show governmentally approved taxi prices and are intended to prevent the taxi driver ripping off tourists or other passengers. In the Dominican Republic, however, it seems to be a national sport among taxi drivers to do just that. Even the lump sums for taxi rides shown in hotels are uniquely high – a rip-off at the expense of international guests.

Example: As promoted at both the airport and the hotel, a ride from the airport Punta Cana (Carretera Higuey-Punta Cana km. 45, Punta Cana 23000) to the Natura Park Beach Eco Resort & Spa in Punta Cana (Cabeza de Toro Valle Jina) costs a lump sum of 25 US dollars (€18.53). This is only for a distance of merely 20.9 km (13 miles) and a duration of about 25 minutes (source: http://goo.gl/maps/vJjBy)!

This means that a return journey to the airport costs some fancy 45 Euros! Let’s take a look at prices elsewhere for comparison purposes: In Bangkok, Thailand, a much longer journey from the airport to a hotel in the city centre costs tourists a lot less at between 5 and 8 Euros. In Leipzig, Germany, a ride from the airport to the main station in the city centre (approx. 18 km, 11 miles) works out at 30 Euros. This means that a taxi ride in Germany is more expensive – but we’re talking about Germany with an average gross salary p.a. of about 27,000 per person (adjusted for purchasing power) and not the Dominican Republic where the average pre-tax salary p.a. amounts to 3,000 Euros (adjusted for purchasing power).

The fact that taxi drivers in the Dominican Republic (e.g. Dominican Airport Transfers) are not willing to negotiate prices with hotel guests also proves that the whole taxi system is built on ripping off tourists. Since hotels seem to primarily work with only one taxi company, it is obvious to ask: Why is there no competition and why don’t hotels call a few taxi companies with different prices if a tourist or business traveler asks for a taxi?

Netz-Trends experienced the following: when we told a taxi driver at the Melia Hotel Punta Cana that we would pay a maximum of $20 instead of $30 for the 20 km journey to the airport Punta Cana, he straight-out refused to drop the price by even one dollar. When we asked the hotel to call another taxi, we were presented with another taxi – from the same company. This driver also stated a price of $30. The first driver now leaned against his car, certain of victory, and looked at us triumphantly, as if to prove the motto: no matter who you call, we will take plenty of your tourist’s money. In the end, the second driver agreed to drop the fare by two ridiculous dollars. As we urgently needed to go to the airport, we were forced to grin and bear it.

Do hotels earn a commission?

This incident opens up another question: Is it possible that hotels in the Dominican Republic earn a commission per successfully completed tourist taxi transport? If not, why don’t hotels take steps to have prices sink to a level which is acceptable and common for a developing country like the Dominican Republic? The relatively expensive petrol ($5 to $6 per gallon in the Dominican Republic, compared to $3 in the US) does not hold its ground as a primary argument for completely overpriced taxi fares.

Regardless, most travelers from Europe or the US don’t expect cheap taxi rides and would like to contribute to the country’s development and economic well-being. However, we suppose that most of the money made with the rip-off taxi rides goes into the pockets of very few clans who have a hand in basically everything going on economically on the island. As one Dominican tells us, development funds worth several hundred million Euros have disappeared to unknown destinations and never reached their targets – the poor, the normal population.

Another example for the taxi rip-off in La República Dominicana: for a distance of only 11 kilometres there and 11 kilometres back (ca. 7 miles each way), a taxi driver charged 40 dollars (€ 29.64) to take tourists from the Plaza Real shopping centre at the Hotel Melia Caribe Tropical to get to Avenida Estados Unidos, Bavaro, La Altagracia. Of course, this taxi did not have a taximeter. The price for the journey has been randomly determined by the taxi driver.

Problem: since tourists mostly have trouble determining distances in foreign countries and cities (and do not check online beforehand) they are completely at the mercy of the Dominican taxi drivers. For comparison: a journey of 11 kilometres in Berlin costs about 20 Euros – so not much more than what the Dominican taxi driver charged. However, the average income per month in the Dominican Republic is 200 to 500 dollars.

Taxi tip by Netz-Trends for the Dominican Republic: Try to avoid taxi rides. If you are dependent on a taxi research the numbers of several taxi services at the hotel beforehand and call from the hotel phone at a local rate. Do not use your mobile – 20 minutes on the phone using a German mobile can easily amount to 60 Euros! Additionally you should roughly know how expensive taxis are at least according to the standards announced in the hotels – just to have some kind of guidance.

If this happens to you you could either refuse to pay the stipulated amount in full or you should contact the tourist police Policia de Turismo (Politur) afterwards who are quite often situated near hotels. Their website can be found at politur.gob.do (still in development on Nov 17, 2013) or you may call on 01-809-221-8697- or 01-809-685-0508. It is important that you keep the exact or approximate addresses of your starting point and your destination in order to make detailed statement. Using your mobile or camera, you should also take pictures of the taxi driver’s ID or the taxi number located on the outside of the taxi doors.

Alternatively, you could contact the hotel’s concierge to ask them to get in touch with the Politur Dominicana and pass on your complaint about the taxi driver’s rip-off and demand clearance. However, since concierges and taxi drivers have known each other for years and could by any means be covering each other’s’ backs not much is to be achieved without any pressure. If it comes to it, you should personally go to the Politur and hand in your complaint – preferably with witnesses. You should definitely not allow any rip-offs in the Dominican Republic (or other tourist countries) just because you’re a foreigner.

Tourists who need a taxi in the Dominican Republic should contact the taxi service directly rather than via the hotel – at least until the Ministerio de Turismo in La República Dominicana officially and properly regulates the taxi prices (this includes taximeters) and finally stops the rip-off of Dominican taxi drivers. Instead of using a car as a taxi, you can also use a moped taxi (ask in the hotel).

Selection of taxi services in the Dominican Republic: