This has now been proven by a survey of the online travel portal Travel24.com (1.5 million users per month; Travel24.com AG) which operates in nine EU countries. For the study, 5.800 holiday makers were interviewed by Keyfacts Onlineforschung GmbH [Keyfacts Online Research GmbH] on behalf of Travel24.com (queried period: 2013/2014):

Prices for travels have never been as low as they are today. However, especially hotel tourists seem to think that they are entitled to more than what’s shown on the bill. You might have guessed it, now you know for sure: theft from hotel rooms is not an exception. It has long become an offense committed by many people.

The result: eight percent of the interviewees which equals the extrapolated value of 4.5 million German travellers have stolen items from hotels in the past two years. Whether they were package tourists or business travellers does not matter. Travel24.com's calculations put the total damage from stolen hotel items at a minimum of approximately 37 million Euros.

On top of the list of the most popular items for hotel theft are hygiene products. Before departure, two out of three hotel guests (69%) secretly and shamelessly fill their pockets with anything they can grab - from shampoo to nail files. According to the survey's extrapolated values, this amounts to a total of at least 3.1 million shampoo or soap bottles that German travellers take from more than 250,000 hotels worldwide every year.

Although they may have wondered whether taking hygiene products from the hotel is actually legal or not, most Germans actually don't care. However, the law is clear: hygiene products are the property of the hotel. Even taking home of an open bottle of shampoo is, strictly speaking, theft. The hotels generally tolerate is anyways, but they take it rather grudgingly. However, some hotels have apparently filed reports with the police in the past.

Hotel guests also like taking writing utensils, sometimes wrapped in valuable leather cases, such as pens, notepads or protective covers that the hotel staff has provided on night stands or desks. These hotel products seem to be so attractive for many that they occupy rank two of the hotel items most stolen by Germans(see attached table).

However, writing utensils are not meant to be taken home, they are also not a present by the hotel, they are only provided as items on loan to the hotel guest. Nevertheless, millions of Germans have a different opinion. According to the survey by Travel24.com, Germans have taken at least 1.6 million notepads, expensive hotel pens or protective covers for writing utensils in the past two years. 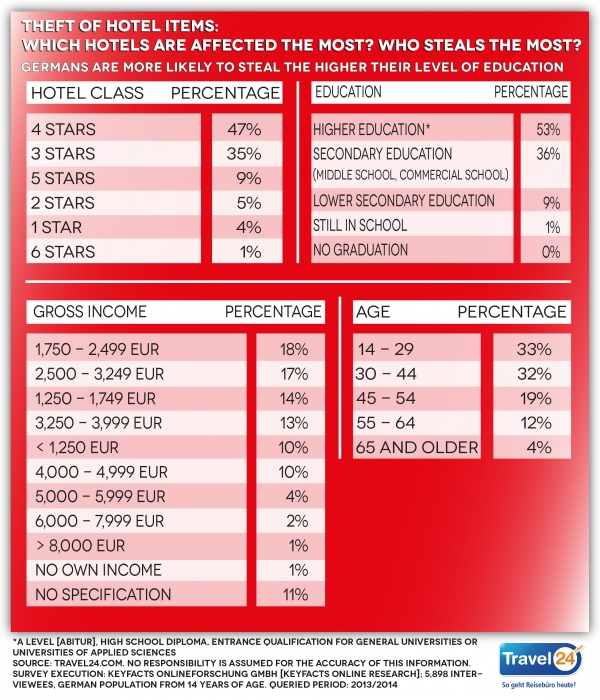 Another seemingly irresistible temptation for many travellers seem to be hotel towels - often big and plushy, they tickle many travellers fancy. 28 percent of the interviewees admitted to have secretly filled their suitcases with hotel towels in the past two years. This explains how 1.3 million towels simply disappeared from hotel rooms according to the survey. Bathing shoes or slippers are ranked fourth with a share of 16 percent or a total of 700,000 stolen items. However, at least when it comes to shoes, there shouldn't be too many hoteliers really complaining about the 'voluntary' disposal of these one-way utensils.

As a principle, if you would like to keep something as a souvenir from the hotel, you should ask if you're allowed to take one product or another if in doubt. The same applies to small, easy to take items such as bottle openers (6 percent), drinking glasses (6 percent), toothbrush mugs (4 percent), ash trays (4 percent) or cutlery (3 percent). When it comes to costs for stolen bath robes, they are not exactly chicken feed for hotel operators either. In some hotels, it's the cleaning staff that has to pay - for example in holiday resorts in the poor country of Cuba. The travel booking portal Travel24.com calculated that 5 percent of Germans confessed the theft, which accounts for a total of more than 246,000 stolen hotel bath robes.

When it comes to stealing electrical devices, some hotel guests don't seem to have any scruples either: Two percent of the interviewees admitted to have dismounted a hair dryer or other bath or hotel room equipment and put their loot into their suitcase. As if that's not enough, the hotel thieves also don't back off from big and heavy items. Difficult to imagine but it's still the reality: Even whole pieces of furniture (2 percent of the cases) or TV sets (1 percent) are moved from hotel rooms without permission.

Who takes the most?

According to the survey's results, two thirds (65 percent) of the interviewed German hotel guests that confess their theft are between 14 and 44 years old. Looking at their level of education, it's surprising to see that hotel guests are more willing to steal hotel items the higher their level of education. More than half of the interviewees that admitted to theft in the survey stated that they have a higher educational qualification - to be precise, the German Abitur. This roughly corresponds to the high school diploma in English-speaking countries. Germans with a lower level of education (for example a Hauptschulabschluss which corresponds to a Certificate of Secondary Education), however, steal the least. Only 9 percent stated that they had stolen hotel items in the past two years.

It's rather difficult to understand the tendency that people with a higher degree of education are more likely to steal from hotels than people with a lower degree considering their level of income. According to the survey, most hotel thieves have a moderate income and earn between 1,750 and 2,499 Euros a month before tax. 18 percent of the hotel thieves belong to this level of income (see table). Germans earning between 2,500 and 3,249 Euros are ranked second with a share of 17 percent. The survey also clearly points out: the higher the income, the less likely people are to steal from hotels.

Other results or the survey: The centre of attention for German hotel thieves are 4 star hotels. 47 percent of the thieving guests like to stay in these hotels. Around 35 percent chose 3 star hotels:

Survey design/basis:Survey execution: KeyfactsOnlineforschung GmbH [Keyfacts Online Research]. Total of 5,898 interviewees that have stayed in a hotel during the past two years.German population from 14 years old. No responsibility is assumed for the accuracy of the information provided.