This is how Google advertises for Google Fiber: Google employees are on the road in a car with the 'Fiber' lettering and logo. They then approach residents of particular neighbourhoods and offer them to switch to the Google Fiber network. 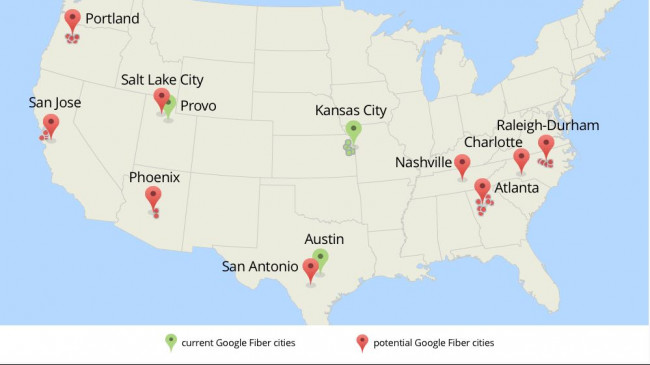 The US company Google Inc. is starting their marketing tour in the US state of Texas to encourage Texans to switch to Google's super-fast - and costly - internet and TV network, Google Fiber.

Initially, Google wants to advertise for Google Fiber in neighbourhoods in Southern and South-East Austin, Texas. With the recently started marketing campaign for Google's Gigabit Internet, the world's biggest digital company, that has a share of 80 percent in search engine usage and online advertisement in Germany, hopes for a quick rollout of its fiber network.

Google's annual turnover of currently around 70 billion Dollars is comparable to that of the German DAX company Siemens, with the difference that Google only has 25,000 members of staff whereas Siemens has more than 300,000.

Mark Strama, head of Google Fiber in Austin, recently wrote in his blog that Google hopes to convince Austin residents, neighbourhood by neighbourhood, to sign up for the super-fast internet and HD TV network Fiber. In order to spread the word, Google relies on word-of-mouth advertising of those residents which they hope to have convinced of the new possibilities.

Contrary to Germany, there is still no blanket coverage of fast internet connections for millions of households in the US, particularly in rural areas. This is why Google would now like to offer an alternative with Google Fiber. At the same time, the American internet company is now quite obviously competing with other telecommunications companies whose original tasks include the development of a fibre-optic network or a cable network.

According to Google, a connection via Google Fiber would mean "100 times faster internet or TV" than today's basic broadband connections in the USA.

Whoever signs up for Google Fiber has to answer Google's questions regarding the current internet speed: 5 Mbps, 10 Mbps or 50 Mbps? Google then explains that Google Fiber could (according to them) reach "1,000 Mbps." They promise that, with Fiber, you could experience "HD in all its glory" on your TV - and all thanks to the speed of 1,000 megabit per second which means that "Google Fiber is up to 100 times faster than today's basic internet speed" in the USA. Google Fiber explains: "That means less time buffering and more video chatting, uploading family videos, and playing your favorite online games. All you need to do is click and you’re there."

Additionally, you could "record up to 8 shows at once", a service for which Google would provide "two terabytes of storage on the Network Box" – meaning that Google Fiber customers could "save up to 500 hours of TV."

Is the "Google Fiber TV App" only a means to help make Google the world's biggest TV provider?

Another advantage of Google Fiber is the new Google Fiber TV App, praises Google, which can be downloaded on any Android (Google's own operating system) or iOS phone (Apple's operating system) and can "turn any of your compatible devices into a super remote control." However, the feature that Google is praising so much is already available for countless other remote controls.

Google Fiber doesn't just offer a lot of storage space and a great remote control - with Google Fiber, Google obviously wants to become the world's biggest TV provider. Google wants to lure customers with the promise that, thanks to Google Fiber, customers will be able to watch "150+ channels and tens of thousands of shows and movies on demand." The new feature "smart search" enables customers to find "all your favorite programs and discover new ones."

Google wouldn't be the world's biggest internet company, though, and possibly even a telecommunications giant soon, if Google wasn't working hard at combining all the user's services to create competitive advantages for Google and lock other competitors out of the Google universe. As an additional service, Google Fiber advertises a cloud service:

"Enjoy one terabyte of cloud storage. With Google Drive, you can back up and access your files anywhere: at home, at the office, or on the go. No matter what happens to your computer or smartphone, your files are safely stored in the cloud."

For now, Google Fiber is planned for 34 US cities

Google has announced that the company is currently in talks "with 34 cities in 9 metro areas around the United States to explore what it would take to bring a new fiber-optic network to their community."

Cities and users in the US wanting to know whether Google Fiber is available in their region should visit the Google Fiber website to find out if their "fiberhood" (as Google calls the neighbourhoods it wants to bring Google Fiber to) is qualified. Customers are also advised to check out the interactive map to watch the building progress.

Additionally, Google takes a social approach with Google Fiber, hoping to gain widespread support within local governments to build the Fiber infrastructure. One of Google Inc.'s promises to communities is to provide free Google Fiber connections to a number of municipal institutions, such as "schools, libraries, community centers, and other public facilities."

Google also creates quite some marketing pressure by almost threatening potential customers: if you don't sign a contract for Google Fiber now you might end up not getting any. Reason: apparently, there's only a "limited window of time" for sign-ups. If people are still unsure and need more information regarding Google Fiber they can visit a number of local events, says Google.

In Germany, a high-speed TV and internet connection with an unlimited plan for telephone and internet costs around 37 Euros a month (plus approx. 4 to 7 Euros for HD TV) with, for example, Kabel Deutschland. For Google Fiber, American citizens will have to pay some hefty $70 per month, excluding fees and taxes, for unlimited high-speed internet.

Any citizen that commits to Google Fiber for at least a year won't have to pay a one-time construction fee of $300. And if this is not enough Google for you, Google even offers "Gigabit + TV" - for the even heftier sum of $130 per month excluding fees and taxes. This certainly looks like Google will be using Google Fiber to turn over many more billions in the long term and to become the biggest telecommunications provider in the USA.

Apart from Google, AT&T are also singing the praises of high-speed internet to American citizens. They are currently working on upgrading the rather slow internet and cable TV connections within the US to generate additional turnover. Going back to Google: If you would like to pay one of Google Fiber's pricey bills, however, you have to choose one of only a few payment options:

You may pay your Google Fiber bills with credit or debit cards, according to Google's help centre. In addition to regular credit cards, Google Inc. also accepts "debit cards and prepaid debit cards with a Visa®, Amex®, Discover®, or MasterCard® logo." Unfortunately, says Google, they cannot accept cash payment or automatic bank withdrawal. Even paying with a cheque is not possible.