German-language Newspapers in the USA, Brasil, Argentina, and Chile before 1928

While delving in the now defunct German marketing magazine 'Seidels Reklame' from September 1928, we have come across a very interesting article about German media abroad - particularly about German newspapers abroad in the USA, but also in Argentina or Brasil in the 19th and the beginning of the 20th century. We would like to share this article with the netz-trends.de readers as a contemporary historical document for their information. Unfortunately, we have been unable to get in touch with the author or possible descendants. Therefore we hope that we are not treading on anyone's copyright toes with this article. The sections marked in bold have been highlighted by ourselves in order to increase readability - the same applies to the subheadings. 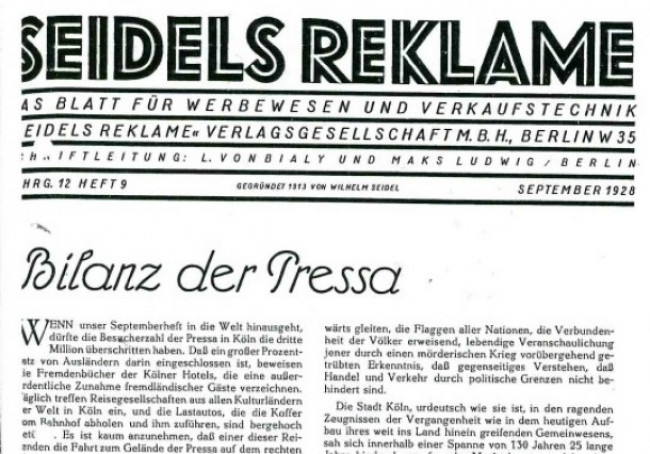 Cover page of a 1928 issue of the German marketing magazine 'Seidels Reklame.'

Even if there are extensive contemporary historical documents available for posterity on the internet, it is nevertheless a fact that millions of books, writings, newspaper or magazine articles lie dormant and undiscovered in archives somewhere, and today's and future generations have a hard time accessing this knowledge.

"The German daily newspapers are currently giving statistical details about the German immigration into the United States of America, and these details have been taken from official sources. It is with astonishment that the German readers, who know about the affairs overseas only from hearsay and not from their own experience, learn about the tremendous influx of German national strength and German spirit that still flows today, after immigration has decreased, into the vast lands beyond the ocean.

Currently, 23,000 German people are employed in the wholesale trade; 15,000 in banking and stock exchange; 13,000 in leading positions in the mining industry; another 13,000 in the hotel industry; 6,000 are employed at the railways; 4,000 in the freight-forwarding industry; 4,000 in coal trading and warehousing; and 8,000 on board American ships. The picture is completed by the latest American census that has produced the proof that, in the intellectual professions, 27,000 clerics, 7,500 jurists, 7,500 artists and actors, and 2,500 university teachers are of German descent. All in all, these are 126,500 people and this list can of course not claim to be complete. The number of German immigrants that have become citizens totals numbers in the high hundred thousands, the number of Americans of German descent in second or third generation totals millions.

One must keep these figures in mind in order to view the German-language press in the United States of America from the right angle, in order to even understand that German-language press in America is possible. In fact, it is not only possible but rather even necessary. Since without these newspapers in their native language, immigrants would become completely estranged from their home country, even quicker than it is unfortunately already the case. The German-language newspapers are the link between the old and the new home; they have been born from an inner compulsion, they are a cultural necessity.

Oldest German-language newspapers in the USA

All the while it goes without saying that these newspapers are the biggest - judging by volume and print runs - in those places where the biggest German centres can be found. This also explains that the major daily newspapers can only be found in the East and Midwest - New York, Philadelphia, Chicago, Milwaukee, Cincinnati, St. Louis, etc. - while the newspapers in the West and South are only released thrice, twice or even only once in a week. Some of these German-language newspapers in the United States are of quite considerable age. The oldest ones should be the New York newspaper 'Staats-Zeitung' ['State Newspaper'] and the Pittsburgh newspaper 'Volksblatt und Freiheitsfreund' ['People's Newspaper and Friend of Freedom'] which were both founded in the year of 1834. The 'Philadelphia Demokrat' was first published in the year of 1838, however, it united forces with the much younger 'Philadelphia Gazette' in the year of 1908. In addition, there are many more newspapers that can look back to a more than semi-centenary publication. It is particularly remarkable that the German-language newspapers in Pittsburgh and St. Louis are by far the oldest daily newspapers of these two cities..

The war has caused quite considerable damage among the German newspapers in America and has reduced their numbers significantly. Many old newspaper had to discontinue its publication. The war's psychosis has lead to those papers losing the big advertisement orders of the leading companies, and without advertisement, a newspaper simply cannot survive. On the other hand, one can notice that conditions have considerably improved since the end of the world's war; not only have those newspapers surviving the war experienced a new boom, new foundations are also to be documented. The 'California Vorwärts'['California Onwards'] is now publishing its seventh volume, the 'California Presse' is experiencing its fourth volume, and the 'Toledoer Sonntags-Zeitung'['Toledo Sunday Newspaper'] is still a very young newspaper, only publishing its first volume.

All these newspapers, may they appear daily, multiple times a week, or even only once a week, have a very special task. They are not, as one might believe in Germany, German newspapers, they are always and most definitely American newspapers that are merely written in the German language and edited in the German spirit. In absolutely no case do these newspapers have anything to do with German politics. One has to explicitly state here, in order to dispel the delusion and the wrong idea once and for all, that there is not a single newspaper in the whole wide area of the United States that could be regarded as a German newspaper. Only the language is German, and its use is held on to, in order to, on the one hand, acquaint new immigrants as quickly as possible with the conditions in the new country and to win them as good citizens for America, and on the other hand, in order not to lose the cultural connection with the old homeland. Maintaining these efforts is in the interest of both peoples.

The German-language newspapers in America serve the most diverse German cultural circles. The major daily newspapers cover of course the entire wide area of German lifestyle, and they devote greatest attention to what's happening in the German Reich. At the same time, there is quite an amount of newspapers that cover individual interests; these are for example the weekly newspapers for traditionally linked fellow countrymen like Low Germans or the Swabians. There is more than one newspaper that is dedicated to the Volga Germans and remains eager to uphold the inner connection to their homeland. There are Swiss-German newspapers, there are those for Transsylvanian Saxons. There are ecclesiastical newspapers written in the German language, there is even a

It would be fundamentally wrong to evaluate the significance of all these newspapers based on their circulation figures: the significance is considerably larger than the circulation figures and nobody knows this better than the American business world and - the politicians. They know exactly how much they have relied and will rely on the German vote. Today, there are more than a dozen daily newspapers and far more than one hundred less often published newspaper in the German language. They are all necessary and vital as a link between America and Germany, between the two peoples and their mentality. Nothing is cheaper practise but also more foolish than wanting to mock and joke about the newspapers often written in curious German, and the one who does this renders their people the worst service immaginable.

What has been said about the German-language press in the United States, is essentially true for the newspapers printed in the German language in other countries overseas. There, too, none of that can be found which would entitle one to speak of a German newspaper. National interests are always and anywhere in the foreground; the language is only the linking means. No country in the world is so interspersed and soaked with German blood as the United States; consequently, the influence of the German element in other countries is less strong and therefore there are again considerably less German-language newspapers:

The leading country is Brasil, even though there is no newspaper there that can compete in age with the North American ones. Themost important daily newspaper in the German language, the 'Deutsch Zeitung' in Sao Paulo, is currently publishing its 31st volume; the 'Deutsche Post' in Sao Leopoldo has been founded in the year of 1883, the 'Kolonie' in Santa Cruz is currently experiencing its 37th volume.:

Significantly older is the 'Deutsche La Plata Zeitung', published in Buenos Aires, that is already experiencing its sixtieth volume and is the most important German-language newspaper in the whole of South America when it comes to volume and circulation. Extraordinarily multifaceted and under excellent editorial management, it can only be compared to the major German daily newspapers of the North American megapolises. Similarly to the 'Argentinische Tageblatt' which is also published in Buenos Aires, the 'Deutsche La Plata Zeitung' releases a weekly edition. In Chile, there is the 'Deutsche Zeitung für Chile' ['German Newspaper for Chile'], founded in 1910. In addition, there are some biweekly and weekly newspapers in the remaining South American states..

In Canada, the 'Nordwesten' ['Northwest'] in Winnepeg has survived the war, the 'Herold' in Edmonton was founded after the war. One must not forget to mention the foundation of a new German-language newspaper in Australia: the 'Australische Zeitung' in Tanunda, South Australia..

The major North American newspapers receive all the daily news from around the world from the major news agencies of the Associated Press and the United Press; the 'Deutsche La Plata Zeitung' cooperates with the services of the United Press, the 'Deutsch Zeitung' in Sao Paulo is supplied by the German agency 'Telegraphen-Union' with everything worth knowing. Furthermore, a number of German-language newspapers overseas have their own correspondents in Germany; particularly offices in Berlin, that is to say their own representations, are operated by the 'New Yorker Staats-Zeitung' and the 'Abendpost' ['Evening Post'] and the 'Sonntagspost' ['Sunday Post'] in Chicago.." (Author in Seidels Reklame: Hermann Jokisch)